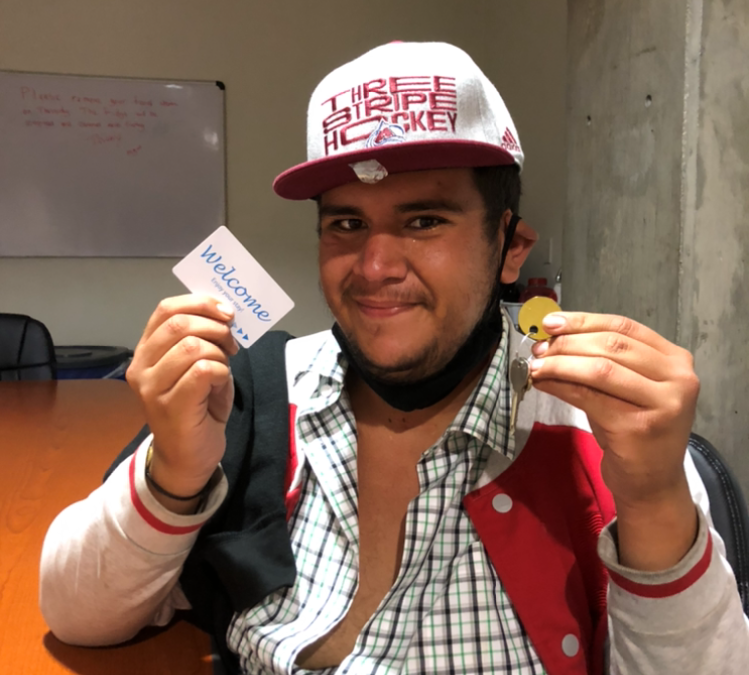 Albert grew up in a very abusive household. His childhood was filled with trauma and neglect. At the young age of 19, Albert fell into homelessness after telling his family he was gay. Albert slept on friends’ couches when he could, but shortly after leaving his parents’ home, he was involved in a serious car accident that left him with a Traumatic Brain Injury (TBI) and severely impacted his memory. The added level of care Albert needed as a result of his injuries left him with few housing options. Albert’s physical and mental disabilities, coupled with his childhood trauma and lack of support left him in a vulnerable position which eventually led him to Skid Row.

Albert was living in a tent in Skid Row when he first became connected to The People Concern. “When I first met Albert, he was shirtless and shoeless living on a cardboard box on the street. I remember he said ‘you literally saved my life that day,” recalls Chantal Peete, Assistant Director of The People Concern’s C3 Center. Our C3 (City, County and Community) Outreach Team worked to engage Albert for two years while he was living in Skid Row. Understanding the power of consistency, our teams continued to regularly engage Albert and built a strong relationship with him over time. Because of the trust Albert had in our team, they were able to refer him to the Department of Mental Health’s (DMH) Full-Service Partnership (FSP) Program, an intensive service program designed to serve adults with severe mental illness. Together, our C3 team and Albert’s DMH FSP team worked to provide Albert with case management services, mental health services and linkage to permanent housing. Today Albert is housed, healthy and safe in his very own apartment!

“When Albert was given his own keys, he burst into tears of joy,” shares Edward Tan, C3 Clinician for The People Concern. Today, Albert receives ongoing case management and continues to work on his mental health to address the trauma he experienced growing up. He is now enrolled in school and attending virtual classes online. Albert is looking forward to starting this new phase in his life and possibly reconnecting with his family. “I can’t believe I did it. I worked so hard the last two years and now I finally have my own apartment,” says Albert.