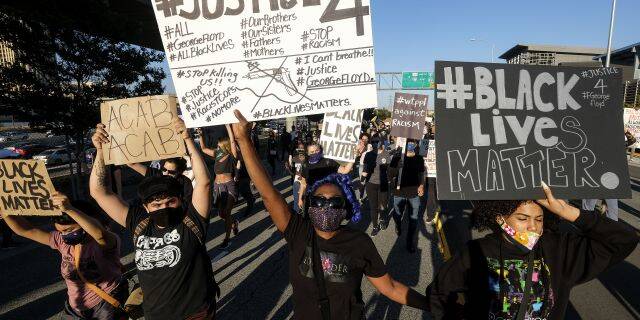 This past weekend, angry and fed-up Angelenos risked their health and the health of their loved ones and took to the streets of Downtown LA to demand justice for George Floyd.

On May 25, George Floyd, a 46-year-old, unarmed, black man was murdered by four Minneapolis police. Video of the incident shows one officer with his knee on Floyd’s back while he cried out, “I can’t breathe,” and “I’m about to die.” The video shows the officer ignore George’s pleas and the pleas of bystanders until George’s body goes limp and motionless. George died at the scene. The four officers involved in George’s case were fired that day. Currently, only one of the officers involved has been charged with third-degree murder and second-degree manslaughter.

The murder of George Floyd has ignited an emotional and political upheaval that can be witnessed across America. Americans are demanding justice not only for George but for all Black Americans who continue to be systematically oppressed by structural racial inequalities in American. Americans everywhere are taking to the streets to demand change and justice for George Floyd, Breonna Taylor, Ahmaud Arbery, Trayvon Martin, and countless other Black Americans whose lives were taken by Law Enforcement.

On May 15, 26-year-old Breonna Taylor, a black woman was shot and killed by Kentucky police. Breonna was in her own home after working a shift as an EMT when three officers forcibly entered her home unannounced and unidentified in the middle of the night. Officers were serving a search warrant in a narcotic investigation for a suspect Breonna didn’t know, who didn’t live in her apartment complex, who lived 10 miles away, and who police already had in custody. The officers shot 20 rounds into her home after Breonna’s boyfriend fired at them, mistaking them for an intruder. Breonna was shot at least eight times and died in her home. The officers involved have not been criminally charged.

On February 23, Ahmaud Arbery a 25-year old unarmed black man was shot and killed while jogging near his home in Glynn County Georgia. Former Glynn County police officer Gregory McMichael and his son Travis McMichael saw Ahmaud run by and thought he looked like a man suspected in local break-ins. Gregory and Travis grabbed a handgun and a shotgun and chased after Ahmaud in their pickup truck. When they caught up to Ahmaud Travis jumped out of the truck with the shotgun. Ahmaud and Travis began to struggle over the gun. Travis fired three shots, killing Ahmaud in the streets. No arrests were made until May 7th, Gregory and Travis were charged with murder and aggravated assault charges. The incident was caught on video by William Bryan Jr, who was also charged with murder and criminal attempt to commit false imprisonment.

On February 26, 2012, Trayvon Martin, an unarmed black 17-year old was shot and killed by George Zimmerman a 28-year old neighborhood watch volunteer in Sanford, Florida. Trayvon was walking home after stopping at a local store to purchase skittles and an iced tea. Zimmerman saw Trayvon walking home and called 911 to report a suspicious person. Zimmerman began following Trayvon after police advised him not to. The exact details of what occurred next are debated. What we do know is that Trayvon was shot in the chest and died on the street. Zimmerman admitted to shooting Trayvon in self-defense. Zimmerman was taken in for questioning and released that day. Several weeks later Zimmerman was charged with second-degree murder. Zimmerman’s trial wouldn’t begin until July of 2013. He was found not guilty. In December of 2019, Zimmerman filed a $100 million lawsuit against Trayvon’s parents claiming false evidence and abuse of process.

The murders of George Floyd, Breonna Taylor, Ahmaud Arbery, Trayvon Martin and many other innocent unarmed Black Americans are senseless, tragic, and rooted in systematic racism. They are also not uncommon. The conversation about housing as a human right cannot be had without acknowledging the racism, sexism, classism, ableism, ageism, and other isms that define our systems. In California, Black Americans comprise only 6% of the state’s overall population but account for nearly 40% of Californians experiencing homelessness, and 27% of the prison and jail populations. The current U.S unemployment rate for Black Americans is 2X the rate of competed to White and Asian Americans.

Although many of the policies that legitimized structural racial inequity are no longer formally in place, their impact continues to undermine communities of color, especially Black Americans. As we advocate for legislative reform to allow the construction of additional affordable and supportive housing, we must also ensure that new policies place the dismantlement of structural and systemic racism at their core if we want to build a more just and equitable Los Angeles.

The work we do serves as a reminder of the endless possibilities that exist when everyone has access to the resources and support they need in order to thrive. Only by understanding the barriers that are already in place can we knock them down.

The People Concern stands in solidarity with Black Americans. As a community, we must use our voices and our platforms to stand up against injustice and combat structural and systemic racism. Now is the time to SHOW you’re an ally, and not just say it. You can do this by speaking up for those who are oppressed, raising awareness, signing petitions, validating stories of racial prejudice, and educating yourself. Let’s make our country a more equitable place for ALL. ⠀